Recent developments in legislation throughout the world have made rate parity an important topic in the hospitality industry.

But despite its frequent appearance in the news, rate parity remains a complicated issue, and one that takes a different form from one market to the next.

To understand what exactly is happening with rate parity in the greater hotel industry, our researchers examined it on a global scale. Presented here, their findings offer a comprehensive look at rate parity from its origins to its current legal status in countries around the world.

What is rate parity?

Rate parity is a legal agreement between hotels and online travel agencies (OTAs) in which the hotel guarantees to use the same rate and terms for a specific room type, regardless of the distribution channel. The price of the room can regularly change – which means the exact rate is flexible – but it must always remain the same across all distribution channels, both direct and indirect.

While the specific terms of each rate parity agreement vary depending on the country and parties involved, there are two broad categories: wide rate parity and narrow rate parity.

Wide rate parity is the more restrictive form of parity agreement. In such clauses, a hotel agrees not to undercut the room prices that the OTA charges for their hotel. This agreement generally applies to all distribution channels, including other OTAs and the hotel’s own website.

Narrow rate parity developed in response to intervention from regulators in Europe. Such clauses generally allow hotels to offer lower rates to other OTAs, but not publicly online through their own websites. Narrow rate parity clauses also generally don’t restrict the hotel from offering lower direct rates when it’s through indirect or offline channels, such as email or telephone bookings, or to guests in their loyalty programs.

How did rate parity first come about?

Franchisers of hotel chains were the first to use online rate parity agreements to prevent third parties from advertising lower rates than what the chains were offering. Later, as hoteliers began to have different prices per room type, OTAs began introducing rate parity into their negotiations with hotels.

How have hoteliers adapted to rate parity?

While rate parity clauses generally restrict the hotel’s ability to offer and promote lower rates online, hoteliers have used alternative methods to incentivize direct bookings. These methods, which vary depending on the specificities of the hotel’s agreements made with OTA partners, may include the following:

What’s the status of rate parity?

The current hotel distribution landscape is a global patchwork of regulations of rate parity clauses and OTA behaviors. 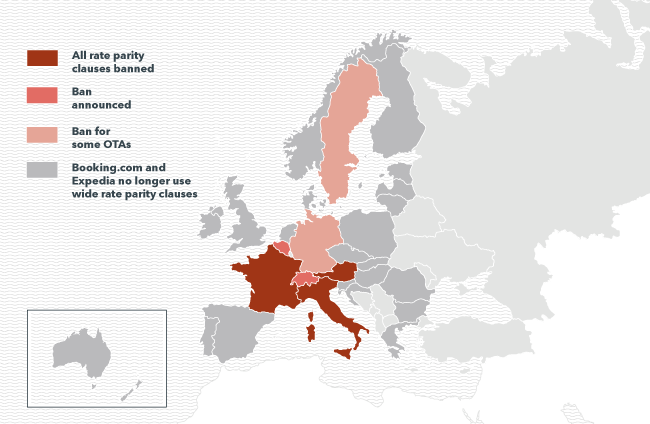 Some smaller OTAs continue to use wide parity clauses across all markets, except where they are banned. 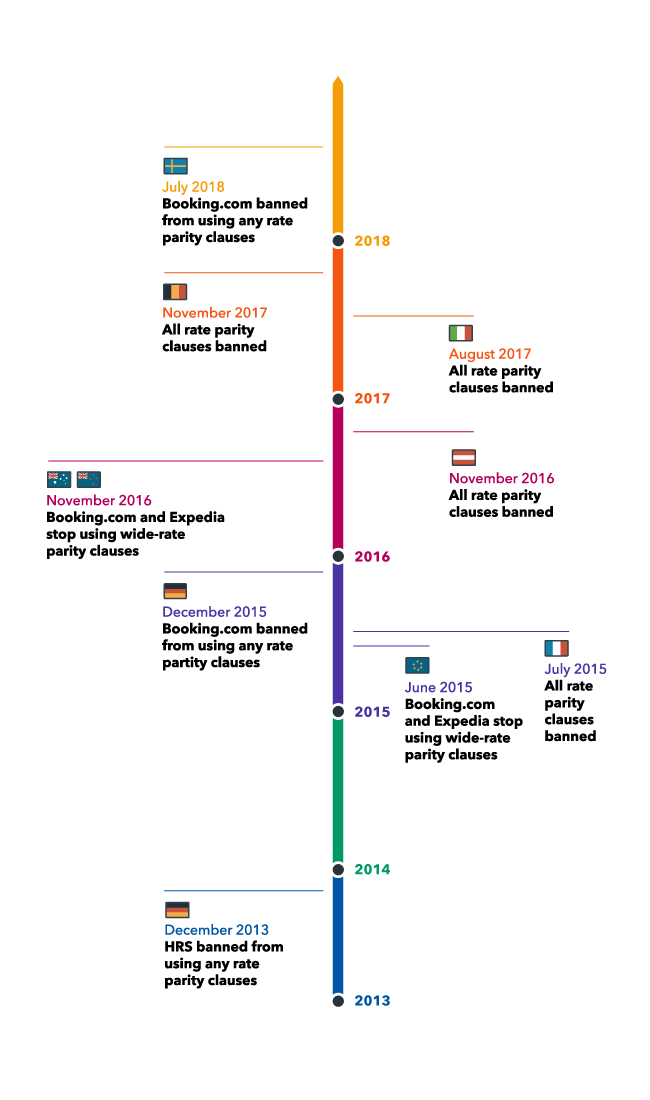 Countries where rate parity clauses are prohibited for some OTAs:

Countries where Booking.com and Expedia have agreed to use only narrow rate parity clauses:

Countries where plans to ban rate parity have been announced:

Countries where rate parity has not been regulated:

Though not an exhaustive list of all the countries currently facing and adapting to changes in OTA behavior and legal proceedings regarding rate parity, this research on major global markets does reveal that rate parity is clearly a thing of the past in some areas of the world and on shaky legal ground in others.

And while in some countries rate parity appears safe for the time being, we’ve likely not heard the last news on what’s allowed and what’s prohibited in the complex contractual relationships between OTAs and hotels.

Article was originally published October 2017 and most recently updated March 2019.

A version of this article was published in April 2018.